Roberto Medda 1 Comment
Concierge Personal Assistant Services We have built up invaluable knowledge and connections enabling us to create a tailor made concierge package for you. So whether you are new comer to the white isle or a seasoned Tenerife our concierge service will ensure that you make the most of your precious
Birthday idea in Tenerife
Read More

Hire A Chef Couple For A Birthday Party in Tenerife

ON 2019 KIDS EAT FREE WITH ALL LARGE GROUPS

We belive in ‘local fresh food’

Roberto Medda Leave a Comment
In general, the local food system is associated with sustainable & organic agriculture because of its connection to smaller family farms who typically use these types of methods.         We love buying a food grown or made close to our home, or at least within your regional
Personal chef Service Tenerife
Read More

Roberto Medda Leave a Comment
Want a pair of top chefs to prepare and serve your meals for you? Then add this to your order! Roberto & Brigida will dazzle you with their culinary skills. You decide wich menu you’re having. They do the shopping and prepare your meal. How good is that?
Personal chef Service Tenerife
Read More

Let’s be real, there is ALWAYS room for dessert!

Roberto Medda Leave a Comment
Private chef Tenerife If you want to enjoy your holiday with family and friends, hiring a cook for few private dinners during your stay may be a wonderful idea. You won’t have to even think of preparing a large degustation dinner. Of course, you could also opt to have only
Personal chef Service Tenerife
Read More

A Mediterranean taste is just an extension of ourselves …💕

Let the Fresh Meals Come To You with Personal Chefs

Roberto Medda Leave a Comment
Everyone loves to have good food. Preparing a good food is always a challenge as well as the most time-consuming part of our lives. Many a time it happens that it becomes difficult to choose the right food with the right ingredients. Usually, a person consumes three meals per day,
Personal chef Service Tenerife
Read More

How Personal Chef for Travelling Make Your Journey Easier & Fantastic?

Roberto Medda Leave a Comment
Many people like traveling and so this has become a trend in many countries across the nation. There are even family traveling, institute, corporate traveling and many others. Taking the whole picture into account, when it comes to foodies you might be very busting to prepare all the food for
Personal chef Service Tenerife
Read More 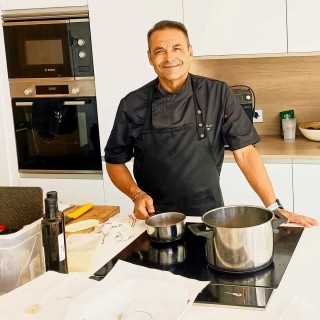 I was born in Switzerland but grew up in Sardinia Island. I offer authentic Mediterranean/European restaurant-style cuisine , prepared and served in the comfort of your holiday home . I can travel anywhere and anytime. I am a well-traveled chef ,I worked and lived in eleven different countries around the globe .I love cooking and give the real spice of life. Traveling and moving abroad offer me incredible opportunities to immerse in a new culture, language ,food and way of LIFE.

One thought on “Personal Concierge Services in Tenerife”

Thank you for your comments Cancel reply

This site uses Akismet to reduce spam. Learn how your comment data is processed.